Sometimes you will want to load data from huge XML files into the database. So how do you achieve this?

There are more then one ways to achieve this, but most of the time a “SAX parser” is used. The term on Wikipedia for SAX is:

A Simple API for XML (SAX) is a serial access parser API for XML. SAX provides a mechanism for reading data from an XML document. It is a popular alternative to the Document Object Model (DOM).

The disadvantage sometimes of using DOM is that it uses to much resources in the sense of CPU and memory and for really huge files this method simply will not work in terms of performance. Parsing an XML document with DOM acquires the whole document to be loaded into memory before processing can be started. Via SAX only a small memory footprint is needed.

Read up on the Wikipedia pages what the advantages and disadvantages are while using SAX. So if you need to load a big XML document into an Oracle database like me, trying to upload the Mediawiki XML dumpfile, DOM validation will simply not work because of the limitations of my hardware.

A Mediawiki XML document has the following simplified structure:

The content of the complextype “page”, is the XML fragment that I am interested in. At current state a dump XML file, like the one from Mediawiki that is, approximately 17 Gigabytes in size (ASCII, uncompressed), containing roundabout 7 million “page” elements.

So what do you need?

For the Mediawiki data this can be downloaded, for instance you don’t have to go the very big English version, as shown here:

While trying to replay Marcelo Ochea’s example about “Uploading Wikipedia Dumps to Oracle databases“, I was facing the problem of trying to create a utility based on SAX. The old documentation and source code once demonstrated on OTN, as described in my post “Oracle OTN SAX Loader Example“, is based on “very old” source and Java libraries. For example, while trying to compile the code, error messages displayed that some methods were deprecated and not contained anymore in the Java libraries. I have not enough Java programming experience (yet) to circumvent this, nor was my intention to spend to much time to achieve my goal: loading XML data into an Oracle database.

My second attempt was based on the Java code as described and delivered by Mark Drake on the OTN XMLDB forum FAQ thread. This Java code is currently up to date while using it with the current Java libraries. It is described by Mark and divided into the following sections. I derived the names from the main classes, not from the title’s Mark used:

and a configuration file called:

Be aware that “hardcoded” connection default settings are set in “ConnectionProvider.java”.

I know how (see “Oracle OTN SAX Loader Example“) I can compile the command line, the Java development kit and Ultraedit as my main tooling, but this time I was persistent to try to learn how this can be achieved in Oracle’s JDeveloper environment.

I am using JDeveloper more and more, mainly for XML and XML Schema design and I hope/believe the XML parser is in sync with the one while using Oracle XMLDB functionality, but never had tried to compile a Java application. So being a newbie on this, I tried to make it work and in the end I succeeded. For all those out there in the same position, this is how it works. 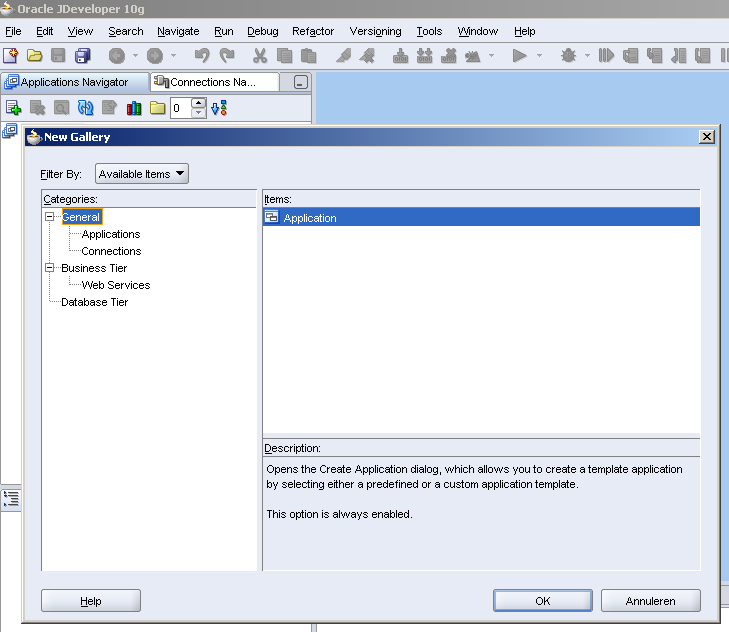 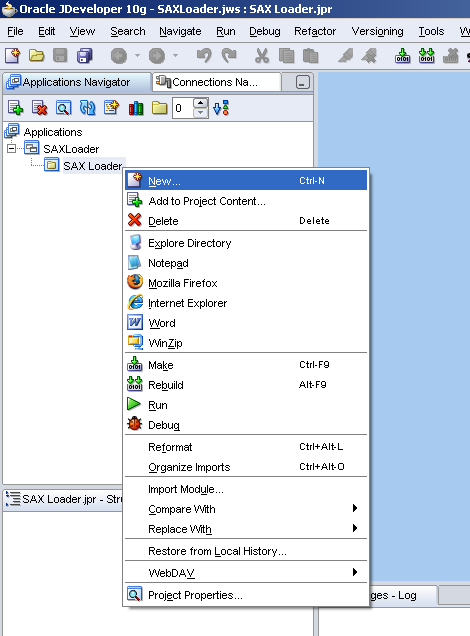 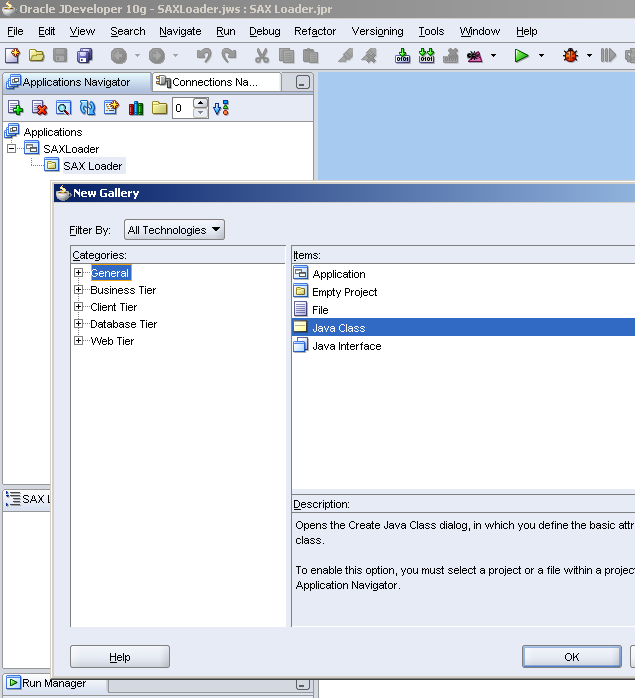 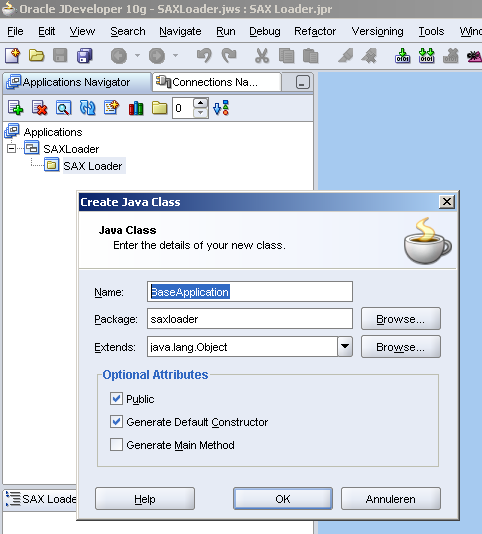 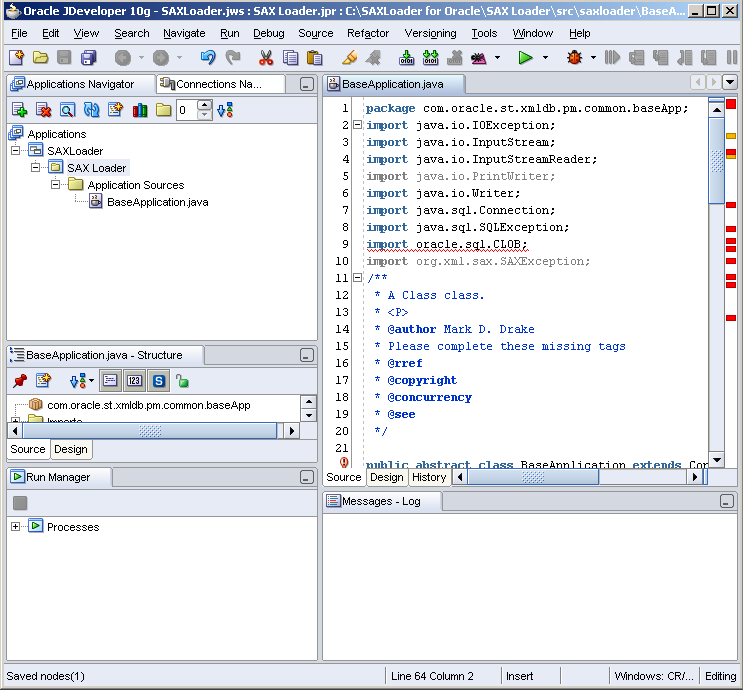 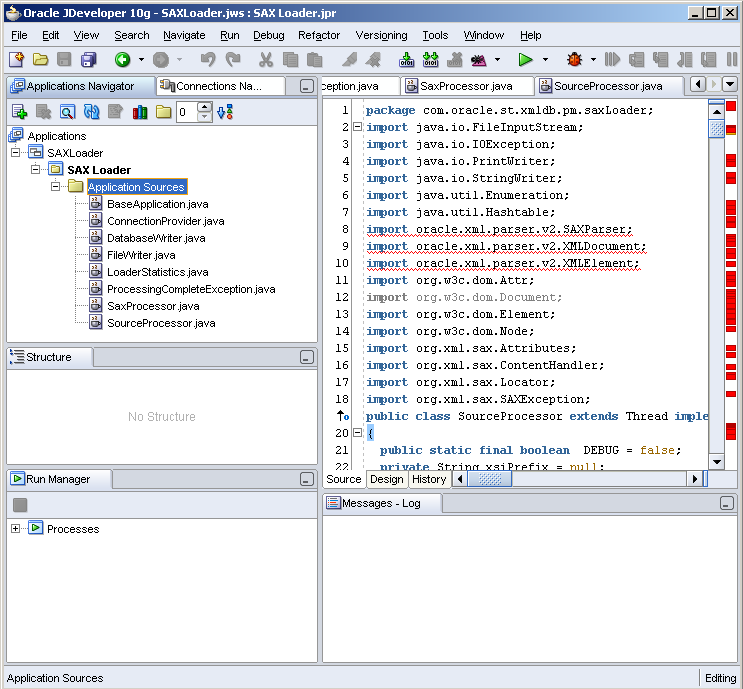 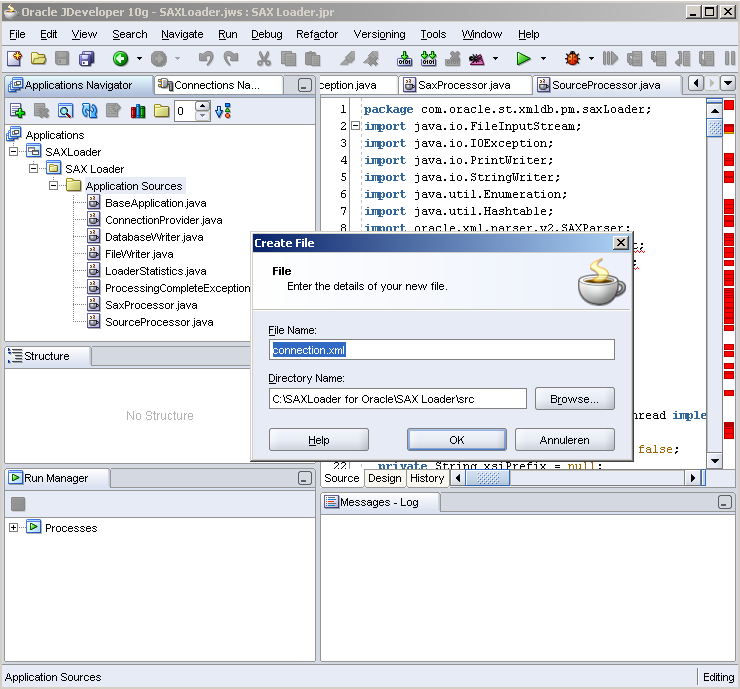 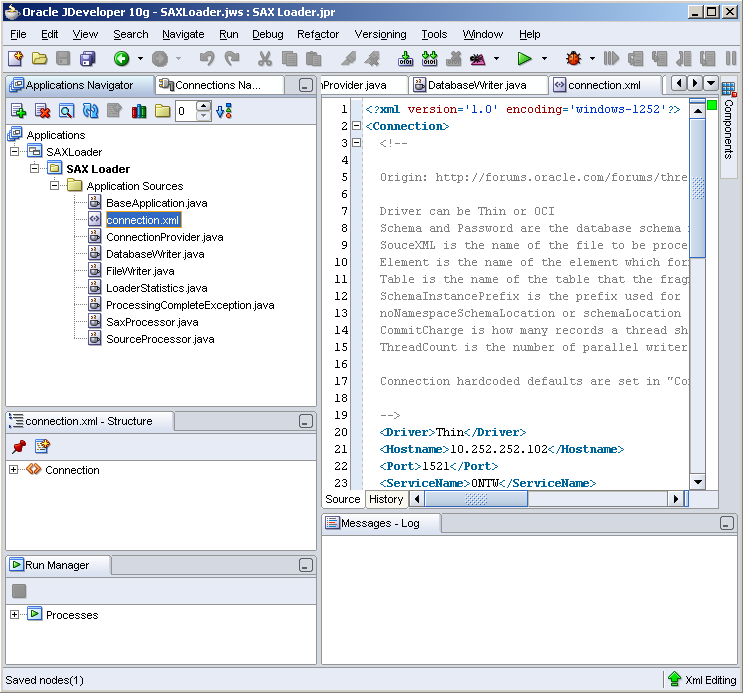 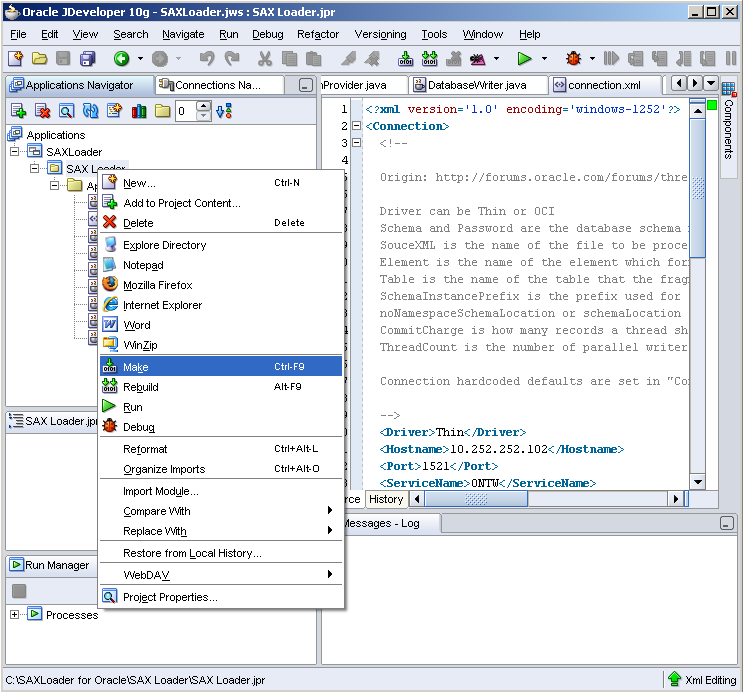 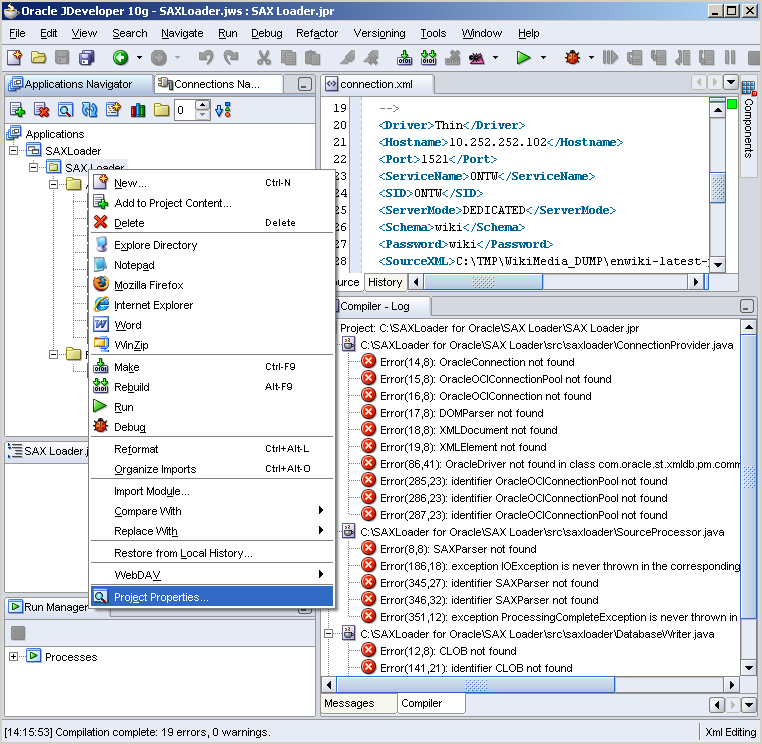 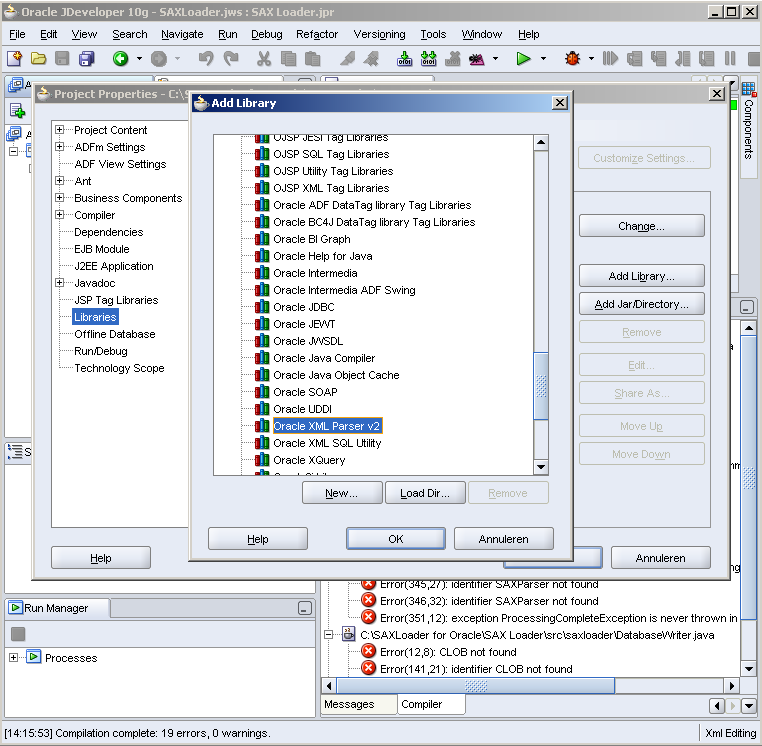 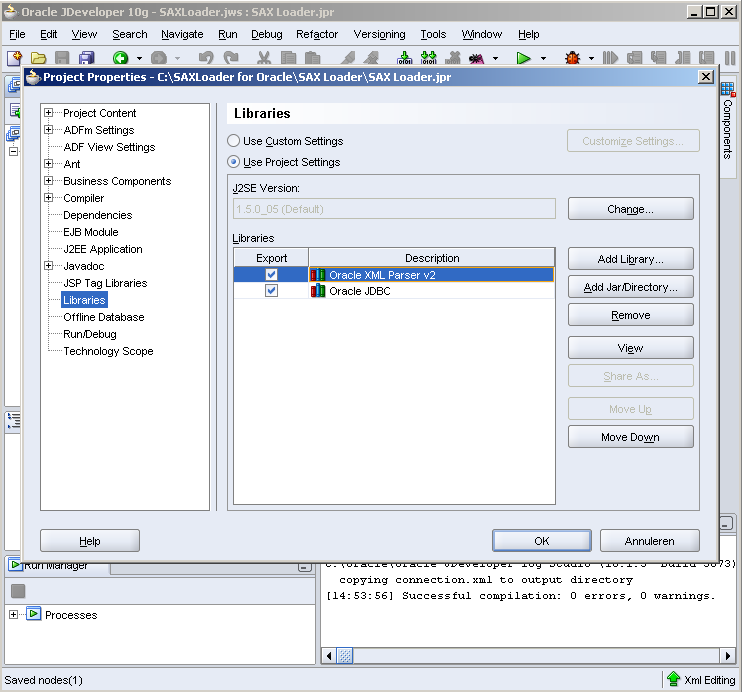 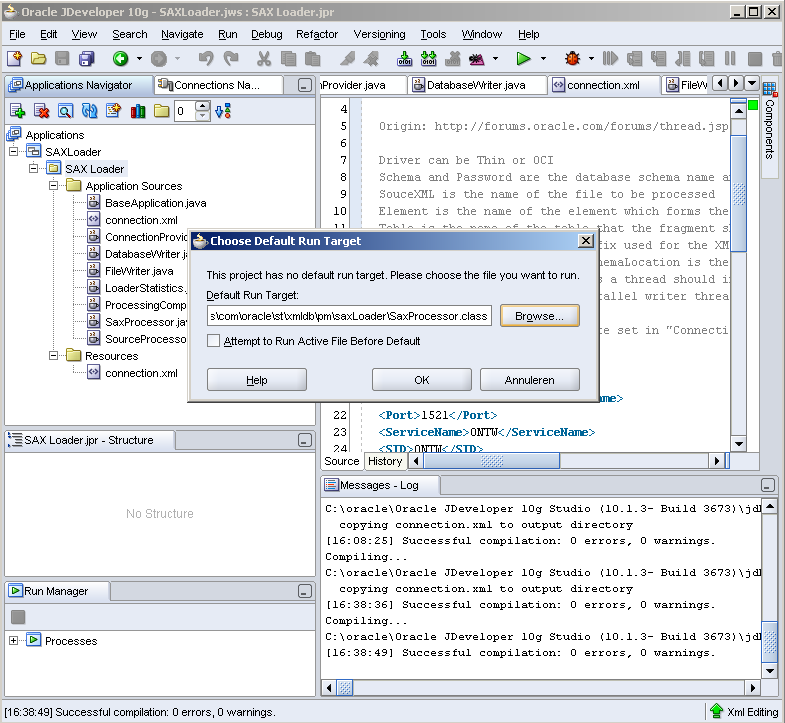 During the first “make” it came up with “Successful compilation: 0 errors, 0 warnings.”. So I guess I am set to go.

If you have a look at the configuration “connection.xml” file that controls some process parameters then you will have in the end something like the following:

You will have the following options (see also the description on the OTN XMLDB Forum by Mark Drake):

As I noticed during some trial and error runs, some defaults are defined in “ConnectionProvider.java”, for instance where the “connection.xml” file resides. So if you run into errors, fix the path and rebuild the Java SAX Loader program.

Depending on the database version, you will have the choice to load XML data in:

The table WIKI_STAGE and WIKI_STAGE_ERRORS were created like the following statement:

So the only thing to do now is set the files (XML file and XML Schema) and you are set to go to run the Java SAX loader application and load you data into the Oracle database. 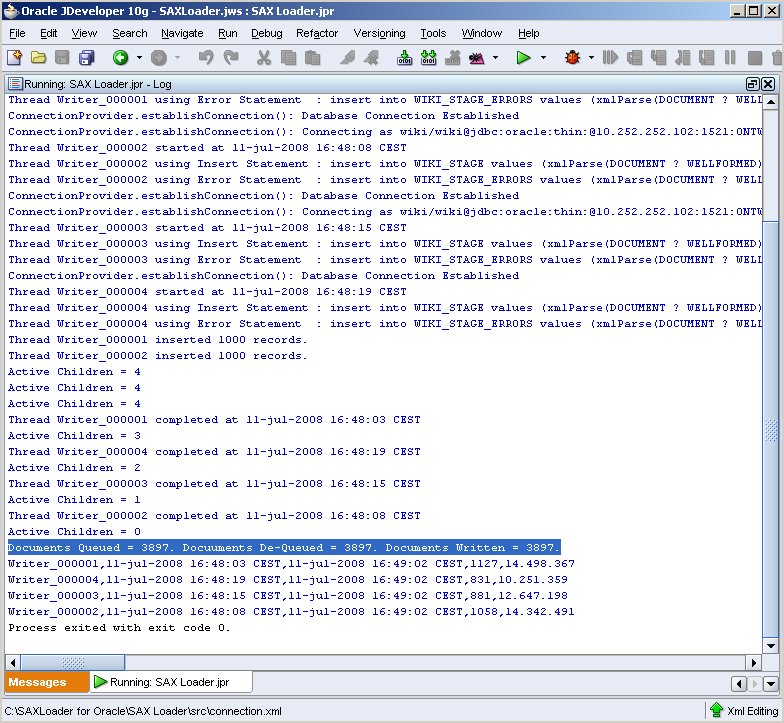 It is working. So now I am able to do some serious loading business.

Bad Behavior has blocked 302 access attempts in the last 7 days.