Apparently there is already a Early Adopter Release since september, but even so, I am very happy that the first XMLDB features are getting implemented. The readme describes the new feature for XMLDB as

I tried it a bit and saw to my plesant surprise that it also provides, will provide, direct XDB Repository access to files and folders. Really cool. The first (small) mistake was also noticed by me, in the overview, describing an XML Schema as a datatype BLOB. Hint for the Oracle SQL Developer Team, a more descriptive, correct content type can be deducted from the XDB$RESOURCE table due to the fact that the content type/mime type will be display in this table (see also xdbresource.xsd) “purchaseOrder.xsd” as text/xml.

Look and feel regarding the editing of XMLType is a bit like Toad does it, at least in the Early Adapter version. Not a direct possibility to edit an XML document, but a extra window that pops-up before you get the option to edit the content.

Anyway…I really like it. Finally XMLDB functionality is enabled in this small gem called SQL Developer as well. Really cool. Its time to put the SQL Developer release, “when in trouble”-tool kit on by standard USB stick.

I tried to solve the issue with the “Content”=”BLOB” issue. The following syntax is based on the code generated by “Publish to APEX” right-click menu item. Seen from an XMLDB perspective it should not be used (although I offer he the alternative, first steps) due to the recommended way doing it is using the XMLTABLE or XQUERY syntax (extractvalue, extract, etc operators are deprecated in 11gR2 and onwards) plus all extravalue operators should have been added with the namespace reference to http://xmlns.oracle.com/xdb/XDBResource.xsd, so for instance:

Anyway details. See the picture regarding the code how to get the contenttype 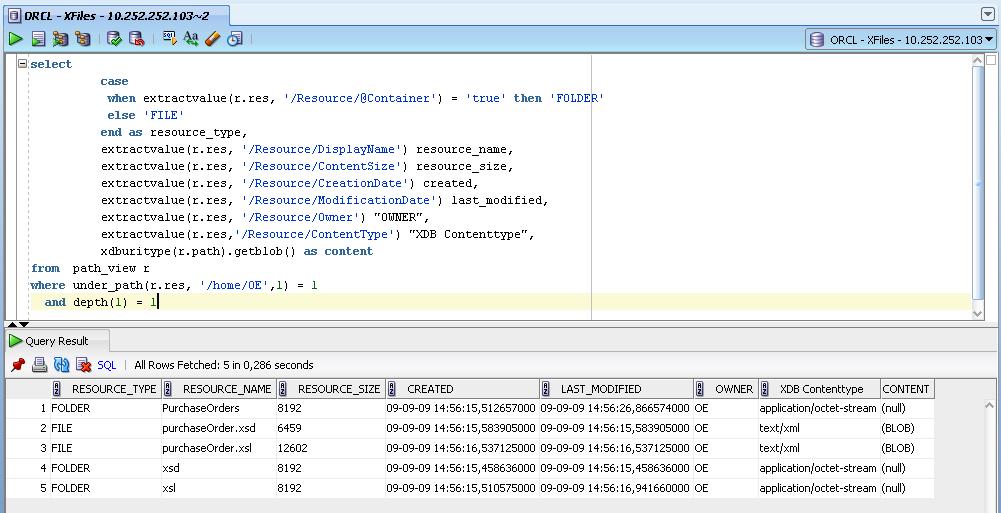