I got a small problem regarding a acceptance environment build on VMware Server (currently version 1.02) on Windows. This virtual environment with, amongst others a Oracle 10gR1 database on it, was once build with the older VMware GSX 3.21 software, but the supported (and paid for) VMware GSX version has become over time, the free downloadable VMware Server edition.

When I started, I thought it would be useful to enable the snapshot function, so if an upgrade or patch process, for database, OS or application went wrong, I would be able to reset the virtual machine to it’s starting point and try again… I noticed that after upgrading the software to VMware Server 1.01, and after a while to VMware Server 1.02, that I couldn’t disable the snapshot function anymore because the enable/disable feature was grayed out. The VMware disks had a lot of REDO files, so I wanted to reclaim this space, because the SAN where the VMware virtual disks were residing, had almost no disk space left.

Normally, if the VMware Tools are installed in a VMware machine, it is possible to shrink the disk space of the virtual disks, but this feature is only available if, amongst others, the snapshot feature is not enabled. In my case, I couldn’t disable snapshot feature because it was grayed out and not clickable anymore…

So what now? We need the extra space of disk volume D of the virtual machine. This would mean reclaiming 40 Gb of free disk space from the virtual machine guest. I searched the internet for a long period but most solutions weren’t appropriate (it wasn’t applicable, we can not buy the commercial stuff, it doesn’t work as advertised, or as in my case couldn’t do it –> my options are grayed out). Defragmenting the disks didn’t help and because fresh data is on the REDO files as well as on the original virtual disk, I can’t just delete the REDO files.

Then I noticed in my virtual machine vmx file that my disks had the status “undoable”, so I searched the internet on this. I came across link http://sanbarrow.com/vmx/vmx-virthw-modes.html and http://sanbarrow.com/vmx/vmx-undoable-mode-for-vmserver.html but it seemed that it wasn’t a feature from the GSX or VMware Server software (but rather something of ESX or Workstation).

It almost did the trick tough, but when applying the described method, only REDO files of one disk could be commited. We have 3 virtual disks… 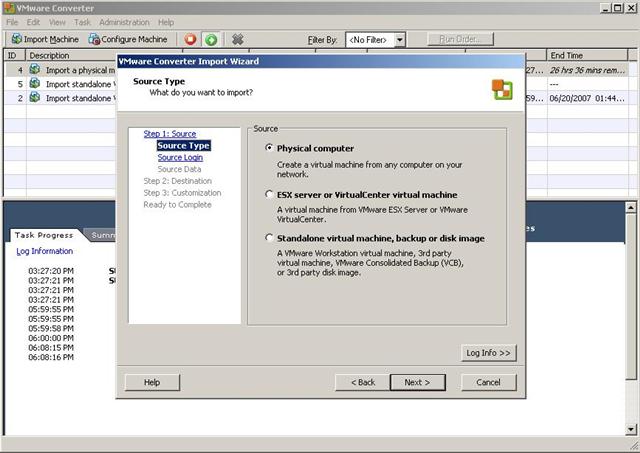 
Then (why didn’t I think of this straight anyway, probably because of the naming “converter”) I thought, OK, how would I deal with it if it were real physical machines? Via, in my mind, image and ghost software stuff, I at last saw the light ;-): VMware Converter software.

VMware Converter is not new software, a long time ago I tested a little with P2V Assistant and the Virtual Machine Importer, but both products didn’t leave a great impression. VMware Converter certainly did now (while being a merge of the two products mentioned before)!. I downloaded the Starter Edition and fiddled with it and despite that I normally hate wizards, this is just plain simple and working stuff. As an Oracle DBA I want to know my surroundings but I am not a VMware specialist (and I don’t want to become one) so a wizard in this case will do.

So I now, to do some proof of concept testing, migrated for fun live physical machines, controlled via the VMware Converter software on my desktop, straight into VMware machines on a network drive (the VMware Server were I want to start them). By the way: all environments are “playground machines” or historical / test or at least not important environments and fast and easy to restore. 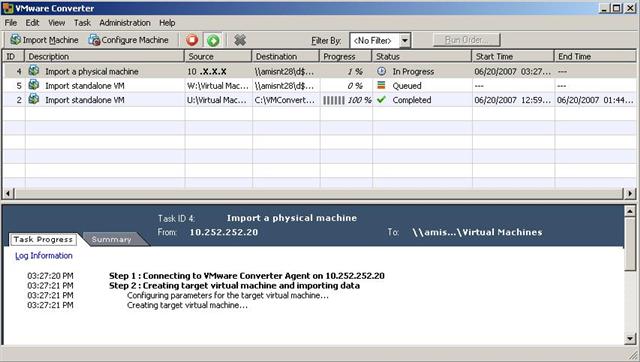 
I converted VMware GSX machines in VMware Server 1.02 machines. I converted a Linux machine into a VMware virtual GSX machine, etc. Knowing how intensive and difficult ghost installations etc can be this procedure works like clockwork. All in all, just great stuff. VMware Converter Start Edition software also almost can everything do what you want in a single / simple VMware / Workstation environment. It looks like (still have to test this) that it even can make a VMware environment of your local host while the software is installed on it

VMware Converter can convert physical machines, ESX machines, VMware virtual machines, VMware consolidated backups, Microsoft virtual machines or third party disk images (Symantec Backup Exec System Recover files, Storecraft Shadowstor files). For now it is “free” software (so you will have no support). Do you want more, than you will have to buy the VMware Converter Enterprise Edition or pay for support for the Starter Edition.

Differences between the two versions: 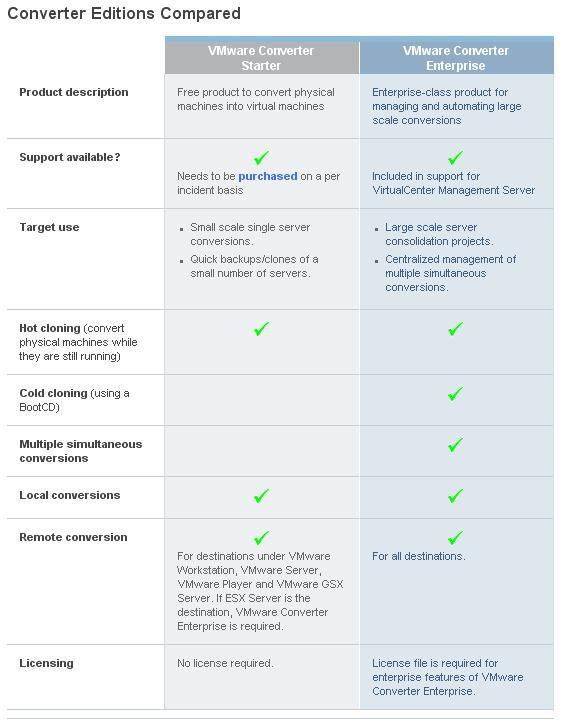 Of course, it probably can’t do all the things that I want, (read up on known issues here), but for now it already consolidated one old server AND it did shrink my virtual disks and that was what it was all about in the first place.

For now, I am a happy man (I will start complaining tomorrow, after all it is a wizard thingy)

My problem virtual machine environment, was after conversion via the Converter, reset to it’s snapshot, instead of the wanted current situation… Which remark did I mention about wizards… So hereby a enhancement request, please buildin an option selection screen regarding which time frame to reset / convert…

Bad Behavior has blocked 466 access attempts in the last 7 days.