It’s amazing how much Lucas already put to “paper”, despite all the mishaps we already encountered. The last two days I lost track on Lucas because he has completely different interests / agenda, and of course he also has to prepare for his sessions as a speaker.

Anyway here’s my input to all the great posts on the web already done (have a look at http://www.orablogs.com for most of them). As pointed out a time ago, my main interest is XML DB. Beside those sessions, I will also pinpoint some on performance, Oracle Content Directory and Open Source speeches, like those on Linux and PHP (future directions). These are old interests with whom I try to keep up, but can’t spend so much time on as in the past, because XML DB forces me to read and learn about stuff I put aside me a long time ago, or in other words neglected, for instance object (orientated) relational objects.

As a newbie (so I am fitting the profile) on this conference, I already missed apparently some important keynotes, but reading the posts of others today, I also realized that this makes my life a little bit easier, because it is now out in the open and I can address them, to a certain point, by name (11g).

I will try to make my impressions, as a newbie, a little bit more colorful (pictures!), because I really enjoyed the posts made by my colleague Alex, on one of the last ODTUG meetings in the States where he spoke and attended.

Despite all my worries about the flight, it went very smooth. Although it is a long flight (it take about 9 to 10 hours), I wasn’t really bored, as expected, probably also because it was my first time across the Atlantic. I saw during flight several icebergs, some of them very big if you can see them that clearly from 10 km up, and Greenland for the first time.

Lucas reading “Is your new colleague a lion or a buffalo?”
and Icebergs near Greenland 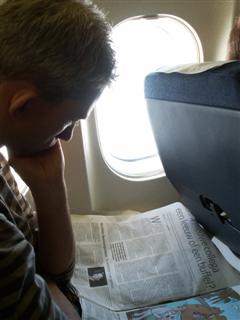 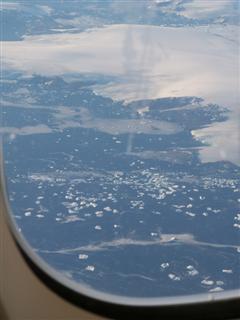 As an Oracle enthusiast, when arriving at San Francisco, some important landmarks where spotted; and transferred to ones and zeros 😉 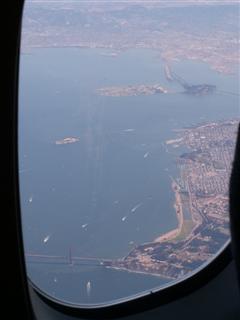 After queuing for half an hour at the immigrations and customs checkpoint we finally entered the US of A. and found a taxi at the airport, to drive us to our hotels. Our taxi driver was very invent full, regarding circumventing the traffic jams. His driving style, by the way, was accordingly resource full, but being used to Greek taxi drivers, I didn’t feel scared 😉

Then the trouble started.

When I came at my hotel (and Lucas at his), and after a call I noticed, Lucas had the same problem, we had booked our rooms for the wrong dates…the 20th up to 26th instead of 21st up to 27th of October. Because of arriving at the wrong date, our rooms where given away. It took me a lot of begging to receive a room for only 1 night. Lucas had to do with a room that was 100$ more expensive for the rest of the week.

So instead having a relaxing start, a Sunday with only two sessions scheduled, I had to get up early to go to the Moscone Center, trying to find a room in a city, were rooms were very difficult to find.

As it said in a local news paper on Monday:

The mammoth gathering (about 42000 people), which is open only to registered attendees, is expected to generate $60 million in revenue for the city’s economy in the form of spending on hotels, restaurants, shops and tourists attractions…

So at five o’clock I woke up and got on my way to Moscone Center trying to get a room for the rest of the week. To my surprise, the hotel lobby was already packed with women. Apparently the other reason why it was very difficult to find a room down town was because there was also a Women’s Marathon (sponsored by Nike) on its way to get started at 7 o’clock: a marathon to benefit the leukemia and lymphoma society.

To make a long story short: it gave me the opportunity to make great pictures and Tracie, of Registration and Housing, saved my day by getting me the same room I already stayed in. I had to book for one night (the said it was fully booked for the rest of the week), I checked out and after walking with all my belongings from my hotel to Moscone – and back – I checked in again for the rest of the week (do you get it?).

Women’s Marathon for a good cause 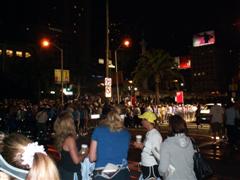 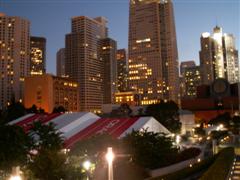 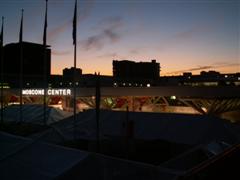 Moscone Center West at 7 am. 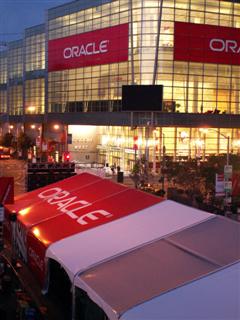 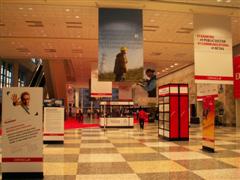 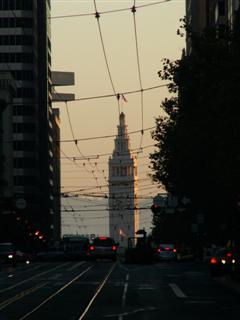 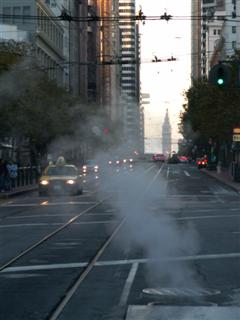 On billboards, the pavement, busses, taxis,
you name it…OOW 2006 is everywhere! 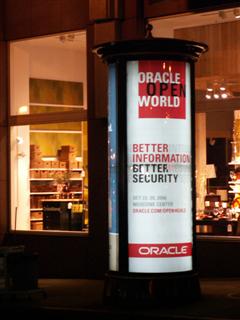 I attended the sessions of Craig A Shallahamer’s “Essential Performance Forecasting” (http://resources.orapub.com/product_p/epf_ppr.htm) and Mark Rittman’s “Inside Oracle BI Server and Oracle BI Suite EE” (http://www.rittman.net/papers-presentations/ ). Both are gifted speakers and both run out of time. This is a shame actually, because both gents had good presentations. Mark saved his session by wrapping it up coherently (http://radiofreetooting.blogspot.com/2006/10/oow2k6-sleepy-sunday.html ), Craig’s session tasted like more…he had a good story about performance forecasting and why forecasting, despite it is only forecasting, can be very use full. He will definitely be on my list again if I have the opportunity somewhere at a conference.

Craig A Shallahamer and Mark Rittman 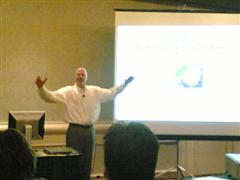 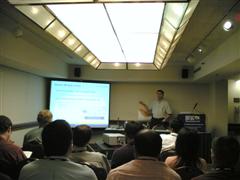 Monday – Open Source, Future and Past

The first session I attended was the “Executive panel on Oracle and Open Source”
Some of the items that were addresses were, for instance, that open source is not the holy solution to everything but should be taken into account per given solution or target. Oracle is very dedicated to open source as was revealed on a slide where Oracle’s database install base on Linux was shown: 80.2% against a much much smaller percentage (no numbers were mentioned on the slide only graphical representation) of IBM and others. 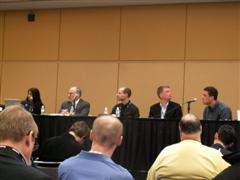 Oracle is dedicated to open source (like Linux) because there can be learned a lot in this area by Oracle and given from Oracle, that’s one of the reasons Oracle is contributing to Open Source code (both “parties” benefit greatly). The panel stated it very often to make this point clear to the audience: Oracle is very committed to Open Source.
PHP, for instance, will be supported on Database, Application Server and JDeveloper (extensions) level. When Oracle bought Sleepycat (Berkeley DB) also the development team switched to Oracle, which, in all, is good for continuation of development of the product. Oracle will test and optimize open source to work well in enterprise environments.

The second session for me on Monday was: “The Future of XML DB”. XML DB is becoming more and more important for all unstructured data out there, some already transforming to XML like Microsoft documents or as information exchange media for Web Services.

To address this issue, the database is evolving into a medium to store all kinds of data like binary, text, spatial, multimedia and, among others, XML. One of its strategies, as it was pointed out on a slide, is to meld database and file system metaphors and providing rich information retrieval capabilities including search of content of diverse data sources. During Oracle 8i (1999), the internet file system (IFS) was introduced. In 2001, Oracle extended this with XML DB, repository, Oracle Collaboration Suite (OCS) and UltraSearch. From Oracle 10g (2004) it supported Ultra Large Databases (ULDB).

All the features XML DB supports are based on open standards which are, IMHO, a great way to do things. Also emerging standards will be supported like the XQuery 1.0 (which is probably an official standard before the end of this year), XBRL (Finance), FpML(Finance), ML7(Healthcare), DICON and EXIF(Pictures), RSS and OpenGIS. To address the performance problems of unstructured XML data (not based on XML Schemas), now binary XML comes to the rescue. Improvements were also made on schema evolution, handling large nodes in XML and portioning XML data. On the language level streaming XSLT will be supported. Foldering will be gaining momentum by the introduction of events, links, compound documents, web services and support for NFS V.4. On the application level, improvements where made for the support of JSR 170, JSR 225, as said binary XML and scaleable BOM (I hope I have all the abbreviations written down correctly 🙂

After all this exciting stuff, presented via slides, two demonstrations where shown. Ms. Jinyu Wang and Mr. Mark Drake demonstrated the new Web Services capabilities presented via WSDL to outside world and the Event driven capabilities where shown by drag and dropping pictures (jpg’s) in to the XML DB WebDAV enabled repository, where information (EXIF) of these pictures was immediately shown in a web page.

Now back to the…

…after dressing up for the occasion, I had a social meeting with Mr. Ken Jacobs in a hotel bar. It was a very pleasant conversation about (most of the time) Oracle, with a man that incorporates an awful long history of Oracle knowledge, commitment and devotion. For this, I have the utmost respect.
Mr. Kyte, if you had certain feelings as described here: http://tkyte.blogspot.com/2006/10/monday-at-oow.html, try to imagine mine 😉

Bad Behavior has blocked 429 access attempts in the last 7 days.