A lot is happening here at Oracle Open World, more than my brain can master right now. Exalogic, ZFS storage, Unbreakable Enterprise Linux, Fusion Apps (finally), Oracle VM for Solaris, etc… Some of those topics aren’t that important for me and/or my customers right now, because they are just out of reach like, for example Exalogic. I read that a full box setup will go for just over 1.000.000 US$ so that is a setup I won’t be managing for a while. On the other hand from an Oracle perspective this is the logic next step to make to provide a solid complete solution from apps layer down to the hardware layer providing a boxed solution for Oracle’s most demanding customers regarding performance, best of breed and availability. 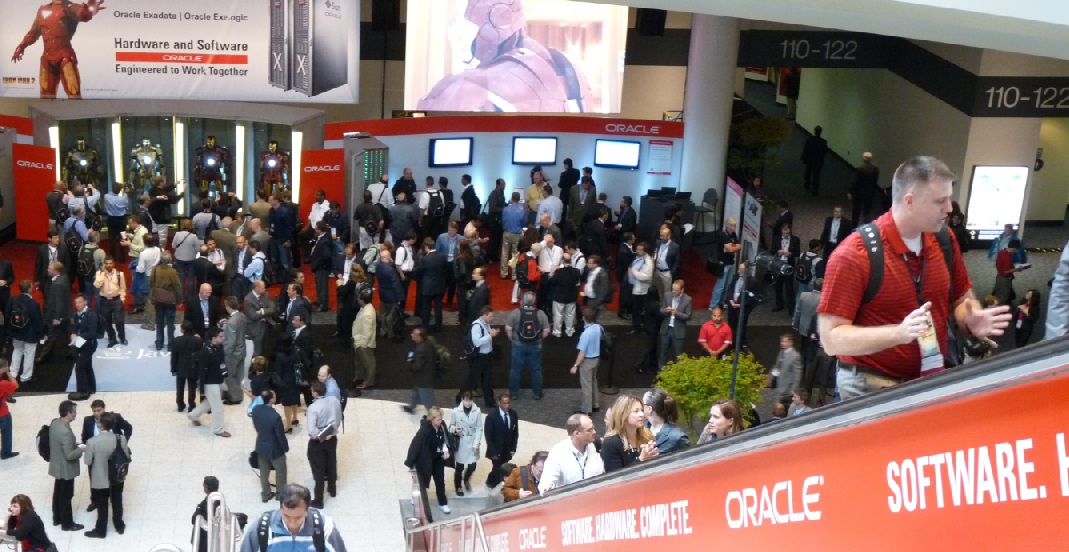 It has very good technology features in there of which I hope it will be open for us “general” database consumers in the near future. One of those Exadata features I would really like to get my hands on would be the in memory index functionality, if not only that it fits perfect with the way I handle XML data, that is “content” based. An other feature would be, for instance, those storage cell optimizations. Anyway, until now, when trying to enable them, it only comes back with a “Exadata Only” warning, so I will have to wait a little (I hope).

So now, I am currently following Wim Coekaert‘s OEL / Unbreakable Enterprise Linux kernel session called “Oracle’s Linux Roadmap”, if not only being interested in the statement of direction about ZFS, OEL and/or Oracle Linux. Oracle Linux will be a fork as far as I have read and/or will it be an option to chose while installing Oracle Linux. From now (Oracle 5.5 and onwards) you can chose installation for a Red Hat Linux kernel strict install or a for Oracle optimized Unbreakable Linux kernel install. You can, although I haven’t tried it yet, also update the kernel afterwards with the Oracle optimized kernel. 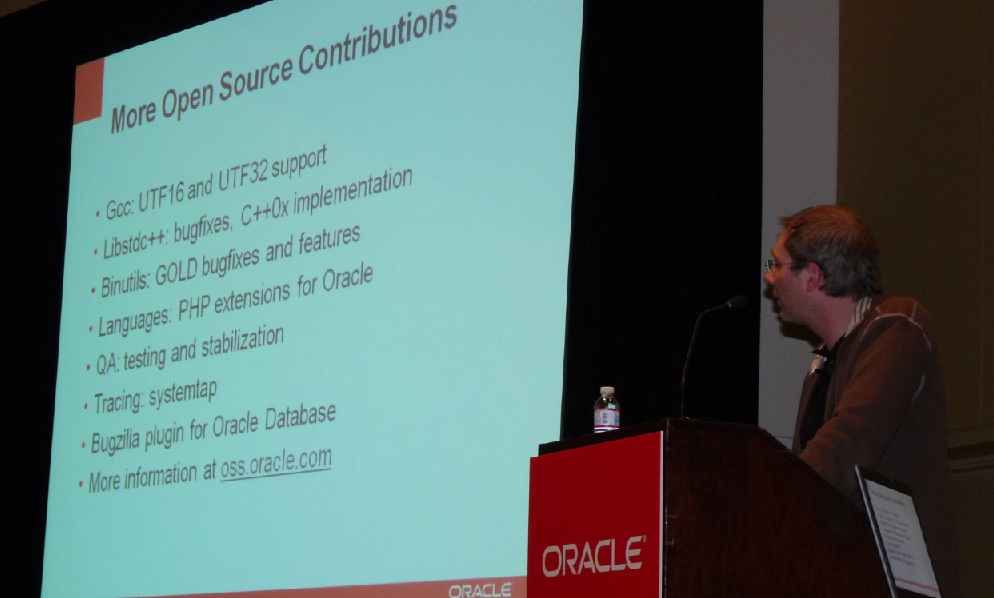 So what is this Oracle Unbreakable Linux kernel part all about…?

But as was mentioned, these limits of being strict Red Hat Compatible had some mayor disadvantages for Oracle, like fixing bugs from a new Red Hat distribution to be properly working in, working with, an Oracle software environment. Red Hat does not validate Oracle software, plus Red Hat adapts community efforts very slowly. So these were some of the reasons why Oracle now created the Unbreakable Enterprise Kernel. Be aware this is not the old thing called the Unbreakable Linux program but actually a new Linux kernel.

So this new Oracle kernel is a fast, modern, reliable and optimized for Oracle software. It’s, among others, used in the Exadata and Exalogic machines to deliver extreme performance. From now on its also allows Oracle to innovate without sacrificing compatibility. In short, regarding the software: It now includes both the Unbreakable Enterprise Kernel and the existing strict Red Hat Compatible Kernel. During boot time you can chose for or the strict Red Hat one or the optimized for Oracle software Unbreakable Enterprise Linux kernel.

As Oracle states “Oracle now recommends only the Unbreakable Enterprise Linux Kernel for all Oracle software on Linux”. You could wonder about what this means regarding certified solutions. My guess would be that Oracle will push the the Oracle Unbreakable Enterprise kernel (OUEL?) but will certify on both kernels if not only that a lot of Oracle’s on Demand services are still based on Red Hat environments.

Until now the OUL kernel has made huge improvements compared to Red Hat, for example, 400% gain regarding 8kb flash cache reads (IOPS)… Oracle also has now the ability to support bigger servers, up to 4096 CPU’s and 2 TB of memory, up to 4 PB clustered volumes with OCFS2 and advanced NUMA support. CPU’s can stay now in a low power state when the system is idle. Also this power management supports ACPI 4.0 and fine grained CPU and memory resource control. 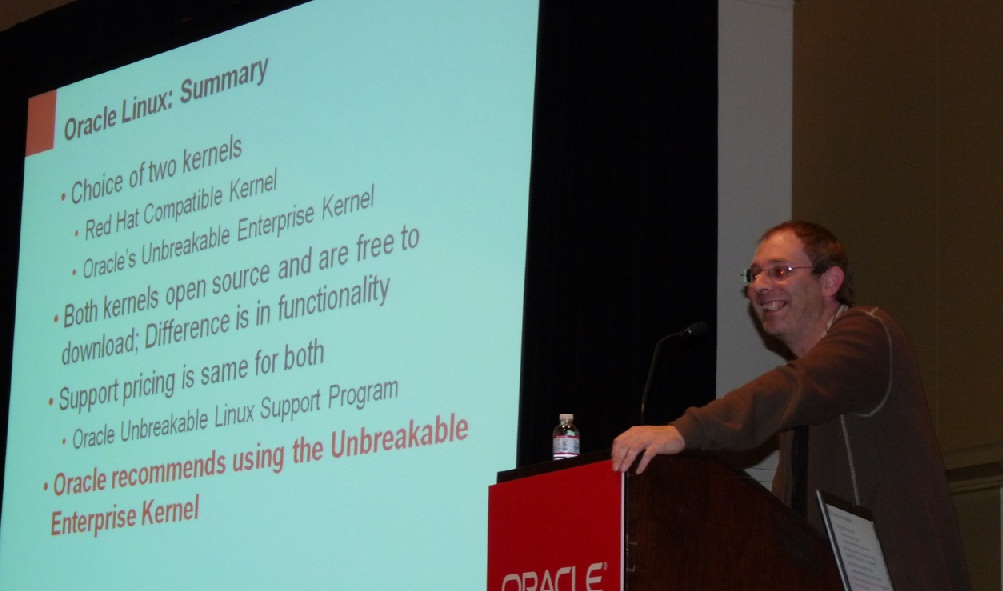 All these additions will flow back into the community which, of course, is what Linux is all about. Some other stuff which Oracle pushed back into the stream/kernel source is better data integrity, stop corrupted data in memory from actually being written by detecting in flight memory corruption; on hardware fault management level, errors detection and logging before they effect OS or application and, for example, automatic isolation of defective CPU’s and memory which will avoid crashes and improves application up time. Diagnostic tooling has been made less resource intensive hoping that people won’t switch them so when a performance or corruption issue happens, then there will trace info. During the presentation the “latencytop” diagnostic tool was mentioned as an example.

The Oracle Unbreakable Enterprise Linux kernel can be downloaded via or the public-yum.oracle.com from OEL 5.5 and onwards or use the ULN network. Follow instructions to download via the public yum server and/or look up instructions via public-yum-el5.repo and apply it on your current 5.5 system, a different way to achieve the same would be to use “up2date oracle-linux” via yum if you have already bought/installed/registered with Oracle Unbreakable Linux support.

Wim described it in more detail on his blog via

(1) On ULN we created a new channel “Oracle Linux Latest (ol5_x86_64_latest)” which you can subscribe to. It’s really very simple. Take a standard RHEL5.5 or OEL5.5 installation, register with ULN with the O(E)L5.5 channel and add the Oracle Linux 5 latest on top as well. Then just run up2date -u oracle-linux

the oracle-linux rpm will pull in all the required packages

(2) On our public yum repo we updated the repo file public-yum-el5.repo . So just configure yum with the above repo file and enable the Oracle Linux channel. [ol5_u5_base] enabled=1 and run yum install oracle-linux

The OUEL kernel improved also on some miscellaneous thinks like NFS IPv6 support and RAID 5 to RAID 6 support. There will be a new volume manager kind of GUI that will support your LUN creation, deletion, expansion and snapshot of NAS storage. All the work done is submitted to the mainline kernel and enhancements will trickle down and be tested in the Enterprise Linux distribution (be aware: Oracle Enterprise Linux is not the same as the Oracle Unbreakable Enterprise kernel).

Also see Wim’s post of today on blogs.oracle.com/wim to get more info. I guess, this also counts for Sergio Leunissen’s blog, who is currently hammering his laptop behind me in the audience, while I am writing this. Keep watching those blogs for more info 🙂

By the way, while speaking with Sergio about the “naming” of this software, which apparently was driven by the need to have clear distinction between “Oracle Solaris” and more general hardware based “Oracle Linux” architectures.

Bad Behavior has blocked 560 access attempts in the last 7 days.