This is so Wrong – WiiWare for the Wii !

As if a Wii owner / user is not yet tempted enough, regarding those cool games. 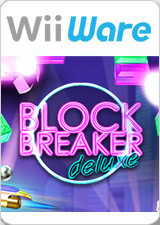 For instance, I was able to get one of those very rare shiny Wii Boards (for the Wii Fit game, amongst others) and the first thing I see after finally being able to setup my wireless connection with my Linksys WAG200G router: WiiWare!

WiiWare is software, fully compatible with the Wii, that you can download via the Wii Shopping channel. I had some 1000 points left so downloaded an old favorite (Block Breaker, The Luxe) of mine for 8 euro’s (I guess roundabout 10 US $). It is a little bit more fancier than the one I have on my Nokia mobile phone but just as fun.

Looking around on the main page, I see there is some very teasing stuff, already out there or scheduled for the near future (“LostWinds” looks very cool!).

Oh and for those who might need the information…

Bad Behavior has blocked 407 access attempts in the last 7 days.