Little bit cynical or not?

Anyway after downloading Oracle VM Server 2.1, unzipping it, it was installed in a breeze. It is delivered as a ISO so I mounted the ISO under the CD ROM of a VMware guest, configured as described below. The guest I used was a VMware Server guest based on RedHat 4 (32b).

So I used the following:

If you don’t count the virtual memory, then the max. total for the VMware HD environment on actual disk will be around 900 Mb. So 1.5 Gb virtual memory plus the almost 1 Gb virtual harddisks will sum up for a total of 2.5 Gb for the whole installation under VMware.

I also already downloaded Oracle VM Manager, but because this has to be installed on Oracle Enterprise Linux, this has to wait… I don’t have a VM host ready and the OEL software is somewhere at the office. To much hassle to download the ISO’s again, so this is maybe something for tomorrow; If I have time, I also have to do some normal DBA work during the day 😎 .

Here are some first pictures of the Oracle VM Server 2.1 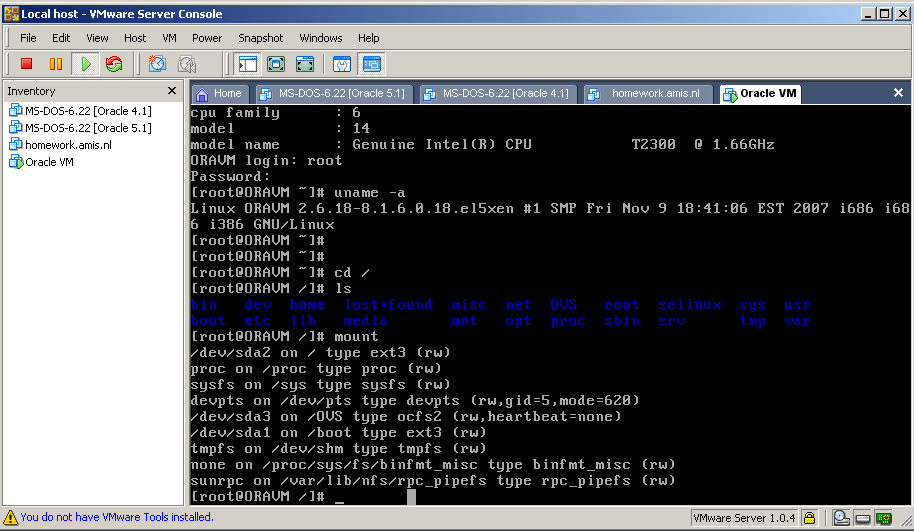 The whole exercise took me less then half an hour. Good first start I would say.

Bad Behavior has blocked 472 access attempts in the last 7 days.