Back to the future (Oracle 4.1 VM appliance)

We had some nice KC-DBA (expertise meetings) meetings in 2005. One of them was about virtual machines (VMware basically). To show how you could use virtual machine technology to implement an environment which would be almost undoable nowadays to realize, a virtual machine environment was demonstrated with Oracle 4.1 installed based on DOS. Thanks to Carel Jan Engel (one the infamous OAKTable guys) – i was able to build a default Oracle 4.1 database environment with all the goodies like the UFI (the user friendly interface).

The old DOS disks where recovered from some boxes on my attic, so with some extra effort, the installation wasn’t so difficult (i still remembered how to do the ansi.sys, autoexec.bat and config.sys upper and lower memory stuff ) All in all it was good fun. 🙂

Strange enough you need(ed) the first oracle floppy in the floppy disk to start the database. I can not remember this from my Oracle 6 days.

Is there anyone who still has the Oracle 4.1 documentation? If so please send it so i could add it to this post for sharing purposes. If you want me to test some stuff on the Oracle 4.1 environment then please send me your SQL statements.

I could have waited on this 😉

I don’t have the doc’s but some collegaes helped me on my way last year – plus i have some oracle 6 experience, which helps. Here a VMware recording to help you on your path regarding start, stop, etc. Download the following AVI (Oracle – Login via UFI.avi ). You will need a codec from VMware to see it – that is if you haven’t installed VMware workstation (The VMware workstation software package contains a build-in movie recorder and will install the VMware codec during its installation process. You can download de VMware codec here: VMware movie decoder)

Toon Koppelaars send me some pictures. So now we know what we are looking for 😉 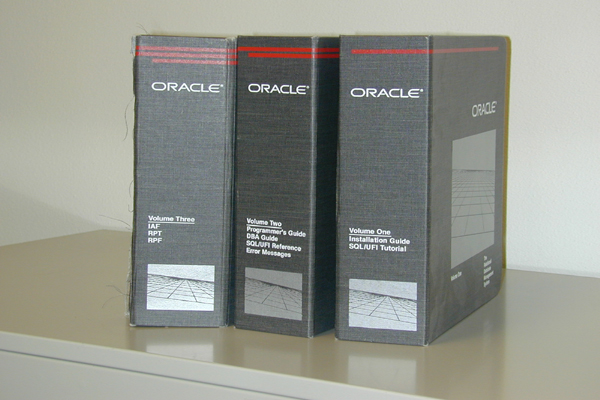 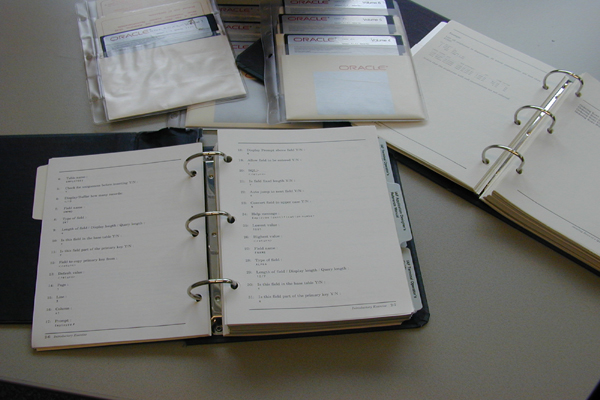 I don’t have Oracle 6 and Forms 3 on a VMware machine yet, but a sub-select on Oracle 4 looks like this 😉 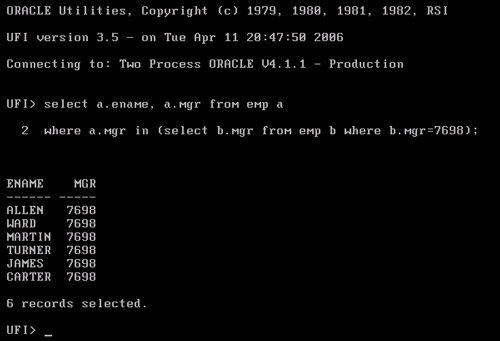 The software does not understand the create database link statement, but maybe thats not the correct statement. I also installed the “help” function, or enabled the help function by filling the “help” table but there is no reference (as far as i could find) to “database link”. 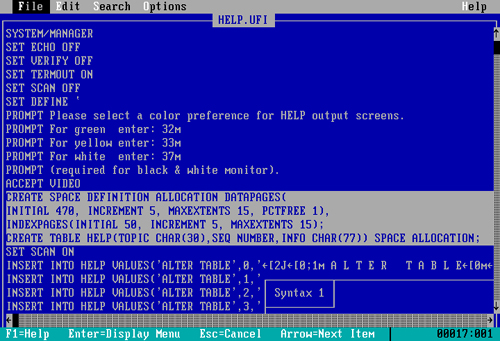 The table was called sysuserauth, quering this you get the following output: 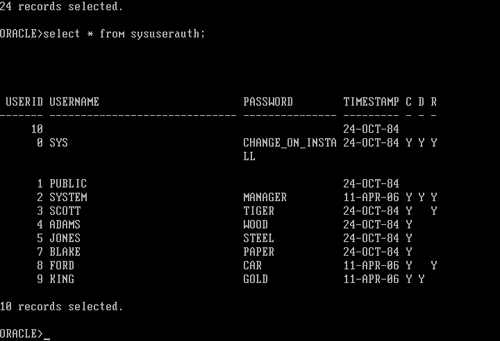 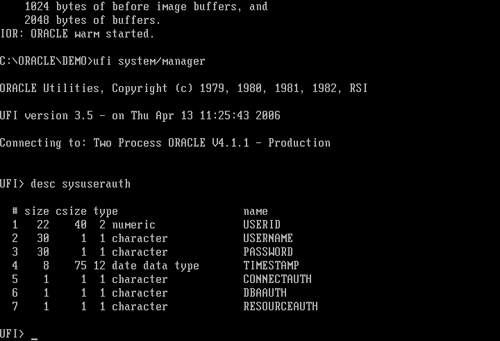 The connectauth, dbaauth, resourceauth columns reference, if the user was granted the connect, resource or dba role (small guess).

Not only did the software fit on a few (5-1/4) floppies
You could also read the complete documentation over the weekend!
Try doing that nowadays.

Very nice. Got the image working. When I start Oracle.EXE mem.exe (or mem/c) reveals Oracle is indeed running. But how do I connect to it with UFI? It keeps complaining that it can not find the SGA (osdlsg: SGA file not opened).

I have updated (the postscriptum) the blog, so this should help you on your way. As said if there is someone with some documentation then it would be great if you would send it to me, so i can post it here.

As much as I can recall, way back in 1987, Oracle did not provide electronic
documentation. You may have a slim change that someone out there OCR-ed
the three booklets that came with the floppies.

I know. I posted this on www.freelists.org (mailing list monitored by Steve Adams) and apart from the software no one could help me on doc’s anymore – but who knows 😉

Dan Hotka still has the UFI documentation, so he claims

Of course, how could I forget: IOR W. Man, that’s a long time ago. Too bad I threw away these grey boxes 2 years ago, since, yes, I did have Oracle 4.1.

A few things I found out. 15 years with Oracle, but started with V6.

* Boot VM
* Optionally, for supporting Swiss Keyboard, edit AUTOEXEC.BAT
o Add a line “KEYB SG”
o Reboot VM
* Connect floppy drive by double-clicking on the floppy icon in the VM’s bottom status bar and activating ‘Connected’.
o Do not choose “Connect at power on”, since the system would then try to boot from floppy at next boot.

The login.ufi is the same as nowadays login.sql. It’s in the demo directory. If you CD \ORACLE\DEMO first and then start UFI, you won’t get the warningmessage.

Is it true that subqueries were a new feature in Oracle 5? It’s be nice to see a screenshot of one not being recognised in v4.

I’d also be interested if anyone could resurrect a v6 database or Forms 3 and see whether the mythical Implicit Cursor Second Fetch thing ever had any truth in it.

This blog entry has changed its contents on kind request by Ken Jacobs. The reason is that it would endanger a project, that i as oracle database enthousiast, would never ever would or want to jeopardize.

Thank you Marco, for your cooperation on this matter. Due to the
possible presence of third-party software (which you may not have
the right to redistribute), it simply is the safest course to simply share
your experiences, but not the software itself.

By the way, subqueries were implemented in Version 2 (1981) of Oracle.
The correlated subquery format came later.

I mentioned subqueries because I read the following in Dave Ensor’s chaptor in “Oracle Insights – Tales Of The Oak Table”:

“Oracle’s SQL implementation has moved on a great deal since, but the key step in Version 5 was the implementation of subqueries, which were simply not recognised by the Version 4 parser.”

Also mentioned as new features in Version 5 are database links and encrypted passwords. It might be interesting to query SYSTEM.USERS.

Because the site was once hacked and due to the use of multiple plug-ins, the content was scrambled over the years. To preserve the initial content; it is now posted here on my own site.

Bad Behavior has blocked 305 access attempts in the last 7 days.